The 75 acre cattail marsh has long been considered the jewel of Tifft Nature Preserve, a remnant of a much larger former complex of wetlands, likely spanning east and south into South Buffalo and Lackawanna. Efforts to protect and restore portions of the marsh have been successfully undertaken in recent years, including the New York Power Authority’s (NYPA) Habitat Improvement Project (HIP) to reduce cover of invasive Phragmites australis at Tifft. In 2015 and 2016, the Buffalo society of Natural Sciences (BSNS) leveraged this successful control work with funding from NYPA’s Habitat Enhancement and Restoration Fund (HERF) to revegetate three acres that were formerly infested. 30,000 wetland plants of 19 species were planted in these areas, which have since been successfully established.

Along the margins of the marsh are other types of wetlands, and important transitional zones between the wetlands and drier upland areas. Mosquito Junction refers to a peninsula of seasonal swampland and shrub-swamp along the western edge of the marsh. A portion of this area contains the only sizable native shrub-swamp left at Tifft Nature Preserve, while the remainder of the site is largely shaded by a seasonally inundated stand of large cottonwood (Populus deltoides) trees. Due to its proximity to the cattail marsh, its existing intact native vegetation communities, and its wetland canopy cover, this area is particularly unique, intrinsically valuable, and is one of the best places to observe migratory songbirds and waterfowl.

Unfortunately, Tifft’s last stronghold of native swampland appears to be diminishing, impacted by invasive species and overabundant populations of geese and deer. Phragmites, along with the invasive common buckthorn (Rhamnus cathartica), have long been established on the northern and western periphery of the site. In recent years, Phragmites has moved steadily southward into the shrub-swamp, as the canopy of cottonwood has opened up from wind storms and increased beaver activity. This five acre stand of common reed is located just outside the scope of NYPA’s HIP, and as the largest stand along the western edge of the marsh, it threatens recolonization of the areas that NYPA has invested in protecting.

Through a collaboration with the Western New York Partnership for Regional Invasive Species Management (WNY PRISM) and the Lyceum at Silo City, BSNS is working to enhance and restore the 14 acres that include Mosquito Junction and the areas west and north of berm pond, by controlling invasive species and replanting the site with native vegetation. The Niagara River Greenway Ecological Standing Committee has provided the funding required to make this project possible.

This project began in September 2019 and will run through August 2022. Primary project goals include the following:

Why are there green and blue plastic tubes all over the site?

To protect the trees and shrubs! These five foot tall tubes protect trees and shrubs until they grow out of range of most hungry deer. Without this protection, most if not all trees and shrubs would not survive. The tubes also prevent rabbits, mice, beavers, and woodchucks from chewing on bark or eating very young plants. An additional benefit is that the plastic tubes act as a mini-greenhouse often being slightly warmer inside and extending the growing season of trees and shrubs.

Tubes protecting shrubs are blue OR green with a blue painted stake. These tubes will be removed soon after the shrubs are 6-12 inches above the top of the tube. At this point, shrubs should be established well enough to tolerate deer browse, and over the period of a few years, will transition away from the unnatural columnar shape from growing inside of a tube.

Tubes protecting trees are green and have no marker or paint on the stake. Tubes will remain on trees until trunks are large enough to break the shelter. The shelter provides some protection against beaver, as well as protecting against bucks rubbing antlers and damaging young trees.

What is the purpose of the black mesh fencing?

The black fencing is a temporary feature primarily to protect planted wildflowers, grasses, and other herbs while they establish. All species selected to be planted or seeded in this project have some level of deer resistance, if not being outright poisonous or unpalatable to deer. Despite this, deer will often sample new plants that they’re not familiar with. This sampling pressure alone could be enough to kill young seedlings and thwart planting efforts. Once plants are established within these fenced areas, it is hoped that many of these species will be able to expand their range outside of fenced areas over time. These temporary fences will stay in place for 3-5 years depending upon establishment success.

Six fenced areas distributed throughout the project site were decided upon versus one large fence surrounding most or all of the site to reduce visual impact, and to keep trails unobstructed for visitors.

Is the use of herbicide really necessary?

We employ Integrated Pest Management (IPM) tactics at Tifft Nature Preserve, which use herbicide only when other control options are impractical or when they would cause more harm than herbicide. Targeted treatments of Phragmites, buckthorn, and other invasive species are often the only successful way to control these plants, especially when they cover large areas and have long been established.

Other treatment methods have been considered including covering plants with fabric, excavating rhizomes, or cutting Phragmites below water level and drowning stems and rhizomes. However, all of these methods have insurmountable problems at the mosquito site, or would have harmful implications to other aspects of the marsh and swamp ecosystem.

When herbicides are used anywhere near trails or other public spaces, marked orange flags are always used to delineate treatment areas. While our rules require visitors to stay on trails, it is particularly important that visitors stay out of areas with orange flags marked for herbicide treatment.

What category of trees and shrubs are you planting?

We are planting a variety of tree and shrub species native to our region. Tree species are selected considering their appropriate fit in a seasonally flooded swamp community, their success in previous planting projects at Tifft, their wildlife value, and their tolerance of high pH conditions and polluted urban soils. Shrub species take into consideration the same factors, but deer browse resistance also carries more weight for this species. Species include, but are not limited to the list below:

Where are you getting your plants from?

Most of the plants in this project are being produced in a greenhouse at Silo City. Many of the plants are being grown from seed collected at Tifft or other local sites with permission. Silo City is using this greenhouse space to grow plants exclusively for their own use, or for this project. They are not growing plants for individual or retail sale.

How can I help?

Please spread the word about the importance of ecological management and restoration work! Additionally, we could always use volunteer help. Head to our volunteer webpage to get involved. We host volunteer workdays once or twice per week year-round. 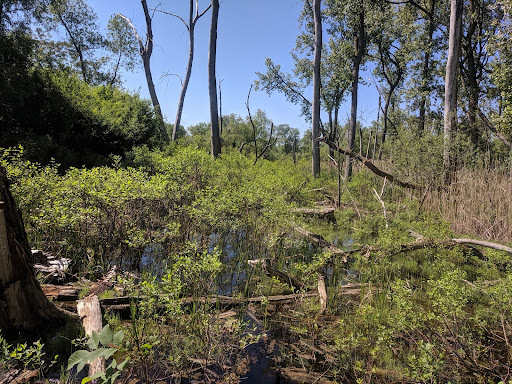 Tifft Preserve Steward and Stewardship Techncians hold up herbaceous plugs grown by Silo City on July 17, 2020. These are the first plugs that will be planted as part of the mosquito junction restoration. After finishing the herbaceous plantings, the WNY PRISM crew assists Tifft interns at the beginning of tree and shrub planting on August 27, 2020. Staff and volunteers cut, pile, and chip common buckthorn and other woody invasive species on January 31, 2020. Buckthorn wood chips are used to mulch planted trees later in the season.